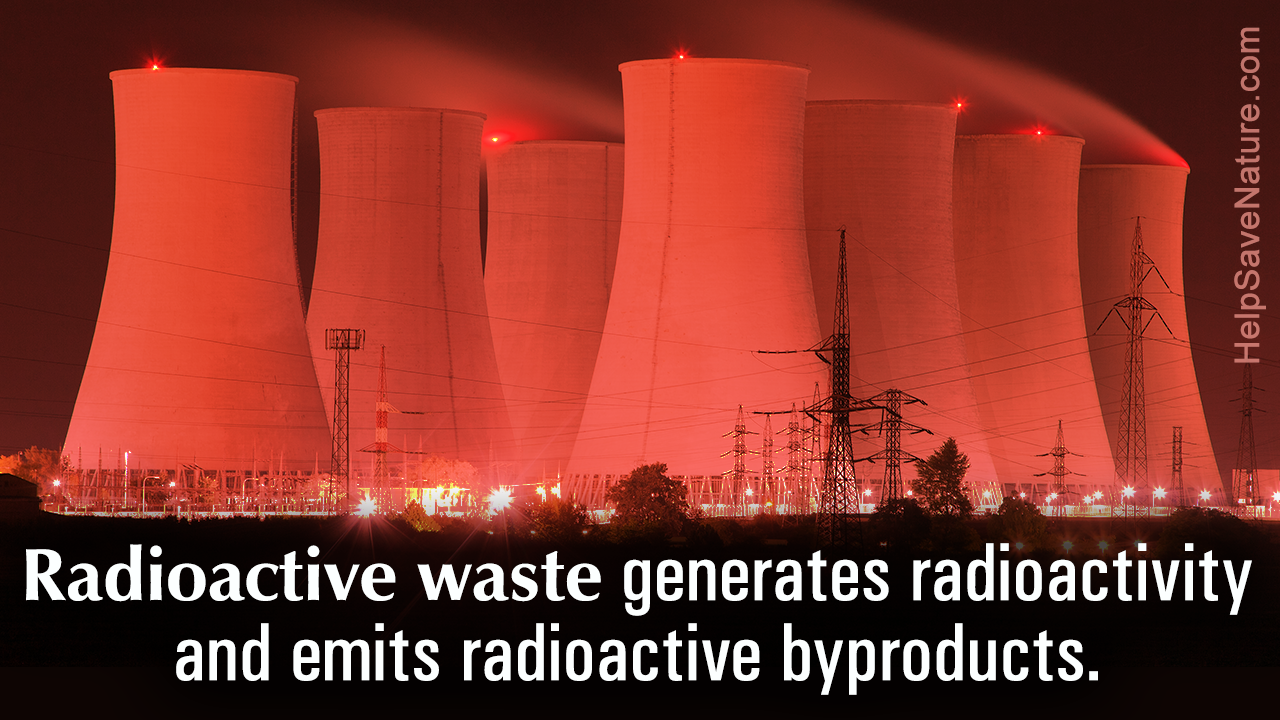 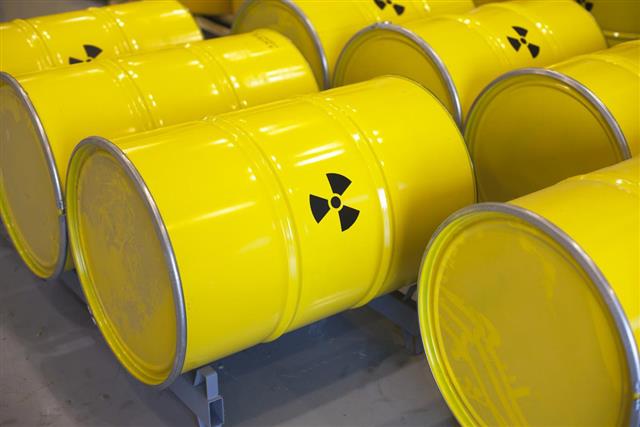 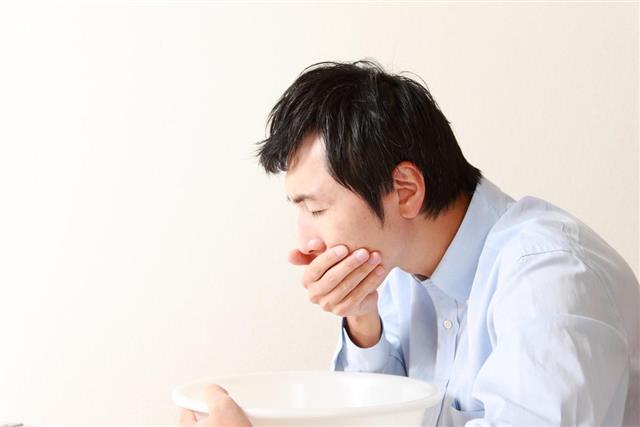 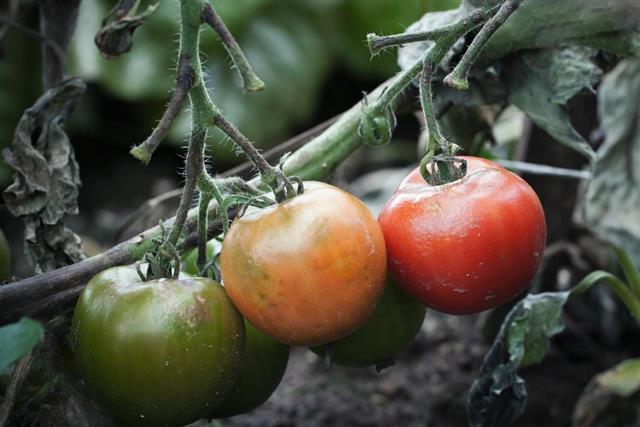 Radioactive pollution is created when radioactive byproducts of a nuclear reaction, either man-made or natural, are dumped in the environment or in the vicinity of human settlements. Nuclear power and research stations are the major contributors to man-made radioactive waste. These facilities bring about a nuclear reaction (usually fission) for the purpose of either production of energy (electricity) or research. When a heavy atom of a nuclear fuel, such as uranium, undergoes nuclear fission, it results into two daughter nuclei, both radioactive in their own rights. These byproducts aren’t reusable and thus have to be dumped. The introduction of these radioactive byproducts causes radioactive pollution.

Radioactive pollution is fast becoming a major concern due to the increase in the usage of nuclear fuel. The radioactive byproducts of nuclear reactions are often disposed without any precautionary measures to isolate the harmful components, which can contaminate air, soil and water. A large amount of radioactive waste is generated from nuclear reactors used in nuclear power plants and for many other purposes. It may also occur during extraction and refining of the radioactive material.

The reason why radiation is considered a threat is that it contains enough energy to ionize a stable atom by separating an electron from it. If ionizing radiation enters the body of an organism, it ionizes the molecules found in the body. This leads to the formation of a large number of free radicals that react with vital bodily components, nullifying their effects by forming new compounds in their place. This can lead to cancer.

The three main types of emissions from radioactive substances are: Alpha Radiation, Beta Radiation and Gamma Radiation. Among the three, the effect of alpha particles (which is, in effect, a helium atom) is the lowest and the gamma rays, the most. Alpha particles can be blocked by a mere sheet of paper (or, at a sufficient distance, even air!), while protection from gamma particles requires thick lead plates. However, accidental ingestion or injection of alpha particles can be fatal, since they can come in direct contact with internal organs and important bodily fluids such as blood. Radiation is only harmful when it comes in contact with the body. If it can be blocked, the mere ‘presence’ of radioactivity is not harmful.

Adverse Effects of Radioactive Waste
On the Environment

► When soil is contaminated by radioactive substances, the harmful substances are transferred into the plants growing on it. It leads to genetic mutation and affects the plant’s normal functioning. Some plants may die after such exposure, while others may develop weak seeds. Eating any part of the contaminated plant, primarily fruits, poses serious health risks. Since plants are the base of all food chains, their contamination can lead to radioactive deposition all along the food web. Similarly, when radioactive waste is washed up in a water source, it can affect the entire aquatic food web.
► Both terrestrial and aquatic radioactive contamination can culminate in human consumption. Since humans are apex predators, the accumulation of radioactive materials on the last rung of the food chain would be maximum.

► The impact of radioactive pollution on human beings can vary from mild to fatal; the magnitude of the adverse effects largely depends on the level and duration of exposure to radioactivity. Low levels of localized exposure may only have a superficial effect and cause mild skin irritation. Effects of long, but low-intensity exposures include nausea, vomiting, diarrhea, loss of hair, bruises due to subcutaneous bleeding etc.
► Long-term exposure or exposure to high amounts of radiation can have far more serious health effects. Radioactive rays can cause irreparable damage to DNA molecules and can lead to a life-threatening condition. Prolonged exposure leads to a large number of molecules in the body being ionized into free radicals. Free radicals promote the growth of cancerous cells, i.e. tumors, in the body. People with heavy radiation exposure are at a very high risk for cancers.
► The rapidly growing/dividing cells, like those of the skin, bone marrow, intestines, and gonads are more sensitive towards radioactive emissions. On the other hand, cells that do not undergo rapid cell division, such as bone cells and nervous cells, aren’t damaged so easily.

Skin cancer, lung cancer and thyroid cancer are some of the common types of cancers caused by radiation.
► The effects of genetic mutation are passed on to the future generations as well. In other words, if the parents are exposed to nuclear radiation, their child could have severe congenital birth defects, both physical and mental. This is tragically illustrated in the case of Hiroshima and Nagasaki, where the aftereffects of nuclear radiation were carried on for generations, and thousands of children were born with physical abnormalities and mental retardation. The radiation also brought about a spike in cancer; the region still (after more than 65 years) has a much higher rate of cancer and congenital abnormalities than the rest of Japan.

There is no safe limit for radioactivity, since even the smallest amount has some effect on the body and holds the potential to be highly dangerous. However, radioactivity can be detected by various devices, so that preventive measures can be taken. A Geiger counter is a universally used device to detect radioactivity.

The effects of radioactivity can be nullified based in three ways:

Time: Get out of the contaminated area as fast as you can.
Distance: Get as far as you can from the contaminated area. Radioactive particles owe their destructive capability to their initial velocity, which enables them to penetrate our skin. The particles lose velocity over long distances, and thus can’t penetrate the skin.
Shielding: Shielding is used in occupations where contact with radioactive substances is common and cannot be avoided. Lead is majorly used as a radiation shield.

The threat of radioactive waste can be minimized to a great degree, or even completely negated, if it is stored for an appropriate time before being dumped.

Various processes have been put forth to reduce the radioactivity of the stored byproducts. Some of the most promising methods are vitrification (forming a mixture of the radioactive waste and glass and storing it in steel containers), reusing the radioactive waste until it becomes sufficiently benign (although it is not feasible right now, research is being done in the field), and storing spent nuclear fuel in dry casks after it has been treated in spent fuel pools for a long period, at least a year. 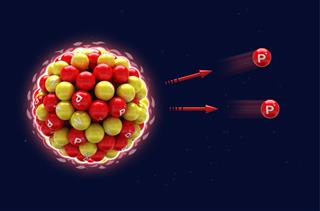 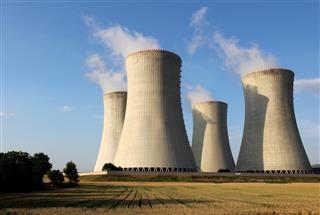