Is the Maldives Sinking?

The island nation of Maldives is sinking, and the 2004 tsunami, which swept across these low-lying islands with ease, made it very clear. Today, Maldives desperately advocates the need to curb global warming as they know that their fate now lies in the hands of other nations.

Home / Land / Is the Maldives Sinking?

The island nation of Maldives is sinking, and the 2004 tsunami, which swept across these low-lying islands with ease, made it very clear. Today, Maldives desperately advocates the need to curb global warming as they know that their fate now lies in the hands of other nations. 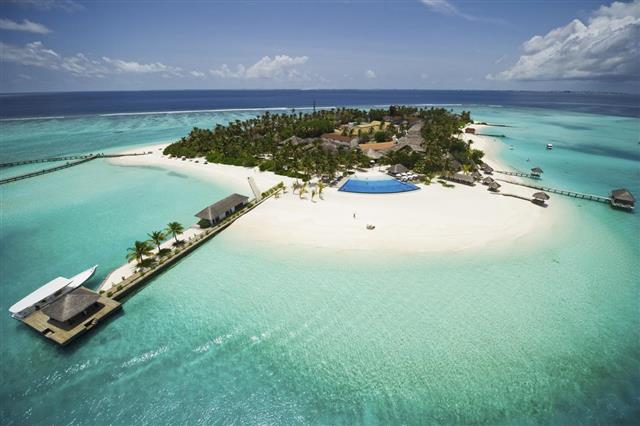 Maldives had been known to the whole world purely as an exotic tourist destination, until the last decade when environmentalists expressed grave concerns about its basic existence. This island nation is made up of somewhere around 1,200 small islands, supporting a population of approximately 300,000. If the scientists working on climate change and global warming are to be believed, Maldives will be completely submerged under water within a period of 100 years. These scientists attribute the sinking of Maldives to the global warming-induced sea level rise. On the verge of becoming the first victim of global warming, Maldives is really caught in a desperate situation.

Global Warming and Sinking of Maldives

The fact that Maldives will meet its watery grave in about a century is not surprising, considering that the highest point on this island nation is just 2.4 meters or 7.8 feet above sea level. More importantly, its average height is just 1.5 meters above sea level, which means that a sea level rise of just 1.5 meters will submerge 80 percent of the island. But how will the water rise to such an extent? If this question was asked a few decades ago, it would not have held the importance it does today. Even elementary school kids have a rough idea of the various effects of global warming. The alarming rise in the amount of greenhouse gases is just making the Earth warmer. The basics of geography suggest that as water is heated, it expands, and therefore, as the ocean bodies are getting warmer, they are expanding and encroaching upon the coastal areas.

This warming is not just expanding the water bodies, but is also melting the ice reserves. The melted ice is eventually drained in the oceans which again leads to a rise in the water level. When we talk about melting ice, we refer to the polar ice caps as well as the glaciers at high altitudes. In fact, the melting glaciers of the Himalayan range have time and again brought flash floods in the Indian subcontinent, which illustrates the intensity of the grievous situation we may have to face in the near future. When the sea level starts to rise, the coastal areas and islands will be the first to submerge. However, the submerging will not just be limited to the coastlines. Eventually, with growing global warming, the encroachment of water will only continue.

The government of Maldives has acknowledged the threat and has started working on the mission to save their land from the encroaching sea, but with a gross domestic product (GDP) of $1.713 billion (according to the report by the International Monetary Fund or IMF as of 2008), there is nothing much this island nation can do against the herculean water body. At the United Nations Earth Summit in 1992, the then President of Maldives, Maumoon Abdul Gayoom, said, “I stand before you as a representative of endangered people. We are told that as a result of global warming and sea level rise, my country, the Maldives, may sometime during the next century, disappear from the face of the Earth.” Since then, Maldives has been trying its best to counter the forces of nature by consolidating the population to the larger and safer islands and raising some areas artificially. These, however, are just temporary solutions which won’t hold ground for long.

It would be sheer stupidity on our part to assume that only Maldives is in danger. There are several other areas around the world which will face the brunt of global warming, but Maldives will be the first, or one of the first, pieces of land we will lose. According to the Intergovernmental Panel on Climate Change (IPCC), a United Nation’s body which evaluates the risk of climate change caused by human activities, the sea level is projected to rise between 3.5 to 35 inches by the end of this century. If this happens, islands like Tuvalu, Fiji, and Nauru in the Pacific Ocean, the Mauritius, Lakshadweep, and Seychelles in the Indian Ocean, and Haiti, Malta, and Surinam in the Atlantic Ocean will disappear by the end of this century. Even the low lying plains of Bangladesh, as well as reclaimed areas like the San Francisco Bay in the United States, Mumbai metropolitan in India, and East Coast Park in Singapore will also be affected to a great extent. When it comes to the amount of carbon emissions, Maldives may feature at the bottom of the list, but the threat of submerging is the greatest for this tiny archipelago.

Maldives was one of the first countries to sign the Kyoto Protocol―a treaty constituted to reduce worldwide carbon emissions in order to curb the menace of global warming. According to the United Nations Framework Convention on Climate Change (UNFCCC), 183 governments had signed and ratified the Kyoto Protocol by February 2009. This excludes the United States, which has signed, but is yet to ratify it. The Maldives, along with the Alliance of Small Island States―a 42-member group of small islands, is trying to convince the United States, which is responsible for a significant portion of the world’s carbon emissions, to sign the treaty, to no avail.

The then US Vice President, Al Gore, had taken a noteworthy step by signing the treaty, but it was never brought to the senate for ratification. In the United States, ratification refers to a formal declaration of agreement to a treaty after getting approval by the senate. However, a few states from the US came up with the Regional Greenhouse Gas Initiative (RGGI) as a pact to reduce greenhouse emissions. The biggest problem in the global warming debate is the difference of opinion between the developed and developing nations. Developed nations demand broad cuts in emission from all the countries, while the rest feel that industrialized countries should take the larger share of the burden.

The inexorably rising sea is not just threatening the land of Maldives, but is also threatening their economy. Depleting coastlines are bound to effect the tourism sector of this nation, thus hampering the economy to a great extent. The small island nation cannot battle the sea forever and the only way out is to abandon the land. The present President of Maldives, Mohammed Nasheed has acknowledged this fact, and even announced the plan to fund an alternative homeland in neighboring countries. But in a world wherein people are already fighting for land, the aspirations of the President seem a distant dream.

Even then, President Nasheed’s list of priorities feature the environment in the top slot, and he―along with his cabinet―has been working to find a viable solution. Their first goal is to make Maldives a carbon-free nation, a goal pursued by a few other nations including Monaco, New Zealand, Costa Rica, Iceland, and Norway. What makes Maldives exceptional is their deadline, the year 2020. Although the plan to make Maldives a carbon-neutral nation is in place, it won’t come cheap for them. The nation will have to spend a whopping $1 billion to switch over to alternative energy sources, such as wind, solar, or wave energy.

Although Maldives is trying its level best to combat the hazards of global warming, the fate of this environmentally challenged nation is actually in our hands. Maldives, along with all the other threatened nations, will be looking forward to the slight ray of hope in the form of the United Nations Framework Convention on Climate Change scheduled to be held in December 2009 in Copenhagen, Denmark. Expectations are at all-time high with all the global leaders coming on a common platform to fight climate change. Maldives and other small nations will be hoping that some significant resolutions are passed to combat human-inflicted global warming.

The people of Maldives know that until and unless the world fraternity doesn’t come together to curb carbon emissions, combating the unrelenting sea will be difficult task, but at the same time, they also know that if major steps are not taken fast, then Maldives will be subjected to a watery grave like the legendary city of Atlantis, and the world will talk about Maldives as a tourist destination that flourished once upon a time.