The compact fluorescent lamp/light (CFL) bulbs contain mercury, which can get released into the atmosphere when these bulbs are broken. However, the dangers associated with mercury exposure can be reduced to a great extent with careful handling and disposal of the broken CFLs.

The compact fluorescent lamp/light (CFL) bulbs contain mercury, which can get released into the atmosphere when these bulbs are broken. However, the dangers associated with mercury exposure can be reduced to a great extent with careful handling and disposal of the broken CFLs.

According to the Association of Lighting and Mercury Recyclers, 98% of CFLs are thrown in the landfills. This can cause the accumulation of mercury in the landfill sites, which can eventually escape into the soil and water bodies.

The compact fluorescent light (CFL) bulbs consume less energy, and hence are considered good for the environment. These energy-efficient bulbs use almost 75% less energy than the incandescent bulbs, which means they are quite effective for conserving energy. But, are compact fluorescent light bulbs dangerous? Are the stories about the hazards of CFLs true? These are some of the common concerns expressed by a large section of people throughout the world, after the news was circulated that these bulbs contain mercury.

In reality, broken compact fluorescent light (CFL) bulbs can release mercury, and hence can be dangerous at times. But, the risks associated with mercury exposure can be minimized with careful handling and disposal of the broken pieces. We all know the health hazards associated with mercury, especially its dangerous effects on the brains of developing fetuses and young children. Apart from containing mercury, the CFL bulbs can sometimes emit ultraviolet rays, which can have harmful effects on the human skin. In this HelpSaveNature article, let’s find out what are the possible risks associated with the use of these bulbs.

CFL bulbs contain mercury in order to emit light. Though several other elements have been studied to replace mercury in CFLs, none has been found to be as effective as this heavy metal. However, compact fluorescent bulbs contain a very small amount of mercury, about 4 milligrams per bulb. In fact, some manufacturers have been able to cut down the mercury content to 1.4 to 2.5 mg per bulb.

It is true we cannot rule out the potential risks associated with the exposure to even a small amount of mercury. However, it should be noted that CFLs release mercury vapor only when they are broken. In such a situation, the exposure to this heavy metal occurs for a brief period of time. Moreover, there are ways in which the broken CFLs can be handled and disposed, in order to minimize the risks associated with mercury exposure.

According to the US Environmental Protection Agency, the use of CFLs can actually help lower the total mercury emission, if the bulbs are disposed properly. This is because, the coal-fired power plants that generate electricity are the main source of environmental mercury. The traditional incandescent bulbs do not contain mercury but the electricity required to power these bulbs releases more mercury into the environment, which eventually ends up in the soil and water bodies. The CFLs on the other hand, consume less electricity, and hence can help reduce the total mercury emission.

According to the Union of Concerned Scientists (UCS), a 13-watt CFL over its 8,000 hours of lifetime requires the amount of electricity that would emit only 1 mg mercury. On the other hand, the electricity required to power a 60-watt incandescent bulb for its lifetime would cause the emission of approximately 4.4 mg mercury into the atmosphere.

CFLs have been found to emit ultraviolet radiation. When mercury hits the electric current, it emits UV rays, which are then absorbed by the protective layer of phosphorus lying inside the bulbs. But, if there is a crack in the phosphorus layer, it allows the UV rays to escape. One study led by Miriam Rafailovich, PhD, Professor of Materials Science and Engineering and the Director of the Garcia Center for Polymers at Engineered Interfaces at Stony Brook, measured the amount of UV rays emitted by the CFL bulbs. The researchers collected bulbs from different locations across Suffolk and Nassau counties, and found that almost all the bulbs have cracks in their phosphorus coating, which caused the UVC and UVA rays to escape.

The researchers also studied the effects of UV emission on human skin cells including fibroblasts and keratinocytes, and observed that the effects are similar to the ultraviolet radiation of the Sun. However, there is no reason to panic unless you use them at close distances. With normal use, the UV rays emitted by these bulbs are not likely to cause any major problem. Nevertheless, you can consider to place additional glass covers over the bulbs, which can lower the risk of getting exposed to the harmful UV rays. The crack in the surface layer of phosphorus is mainly blamed on the spiral shape of the bulbs. As phosphorus is brittle, the twist and turn of the CFL bulbs cause it to break and allow the UV rays to escape.

Measures to Take if You Break a CFL Bulb

Yes, broken CFL bulbs release mercury vapor. But there is no reason to freak out, as the EPA has provided detailed instructions on how to clean up and dispose broken CFLs safely. So, if you happen to break your CFL bulb accidentally, follow the following instructions.

» If your CFL bulb has broken, first make everyone including your pets vacate the room for about 15 minutes. Open the windows to ventilate the room and switch off the central heating or air conditioning system.

» Take a cardboard or a stiff paper, a sticky tape, and an airtight container or a resealable plastic bag. Collect the broken pieces of the bulb with the help of the cardboard or stiff paper. To collect the small pieces of glass and powder, use the sticky tape. Don’t forget to wear protective gloves during the entire cleanup process.

» Do not use vacuum cleaner or brooms, as these can spread the mercury to other areas of your home. Once you have removed all the small and large pieces of the CFL bulb, put them in the airtight container or the plastic bag. Be sure to secure the lid of the container properly.

» Now, keep the plastic bag or the container outside in a trash container or in a protected area, till it can be disposed safely. Call Earth911 to know more about recycling CFL bulbs. Never throw CFL bulbs in your regular waste bin, even if they are not broken.

CFL bulbs release mercury only when they are broken, in which case you can minimize the risk associated with its exposure by following the aforementioned cleanup procedure. If you are still concerned about the mercury content of these bulbs, you can opt for the mercury-free and energy-efficient LED bulbs. But, if you decide to use CFLs, be sure to dispose them properly. 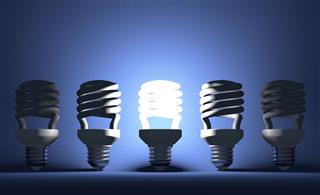